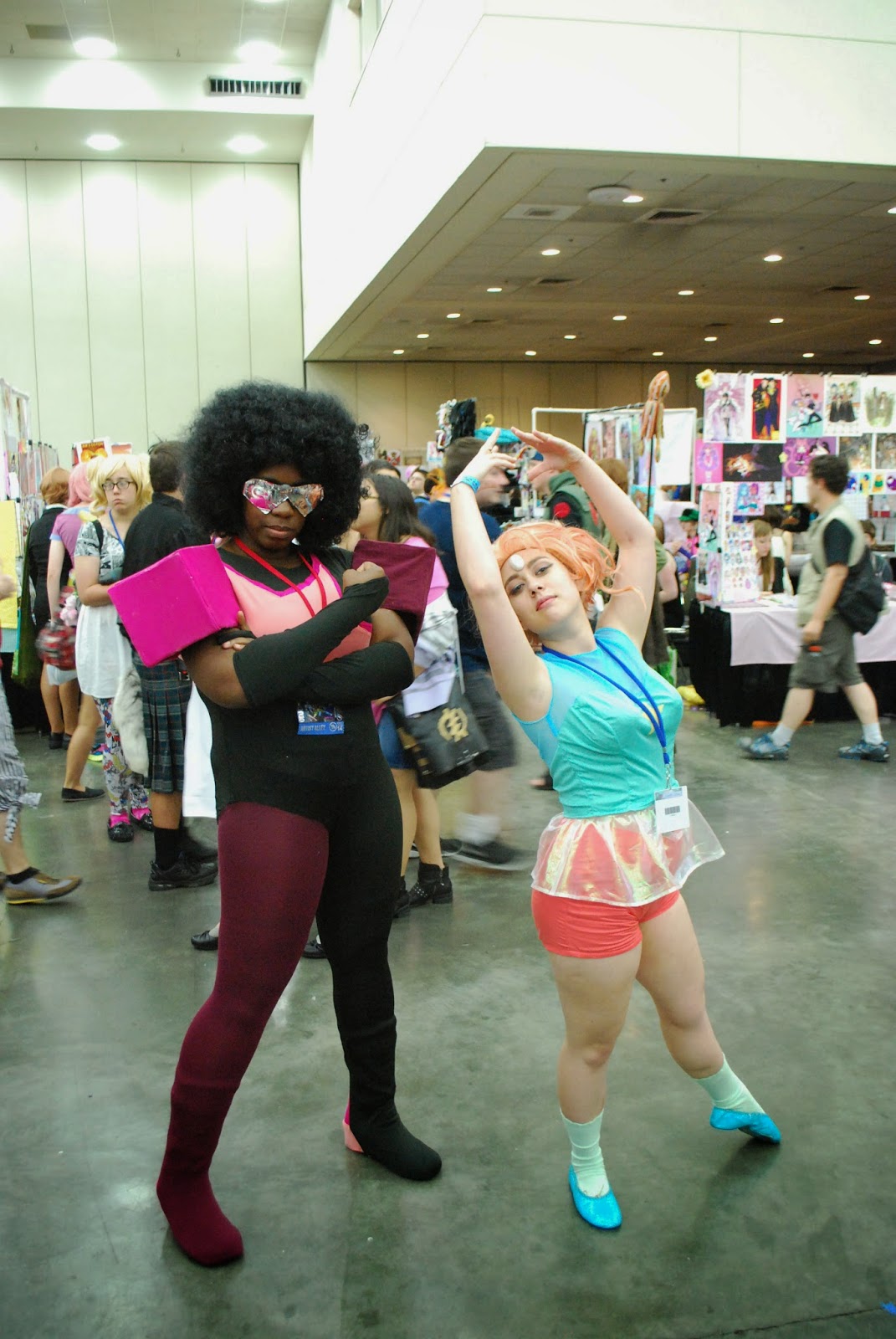 I cosplayed Pearl from Steven Universe at Otakon this last year. One of my favorite characters. I mean seriously- alien sword fighting ballerina from space? No contest. Buuuut her wig provided a challenge. I am by no means a wig expert-Pearl is the first character I've done who's hair didn't come pre-styled- but I've gotten a lot of messages on my other sites asking how I did it, so I figure here is the best place to post my process. 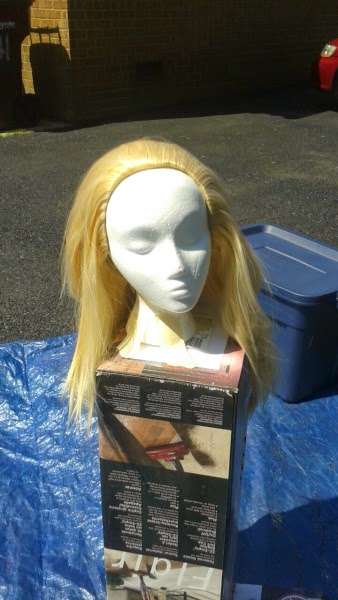 This is the wig I started with: the Matilda from Arda Wigs. It's double thickness, which makes it perfect for spiking up, and the wefts in front are sewn in backwards.  Unfortunately the Matilda does not come in Pearl's shade of blonde/peach/orange/awesome. So she's taped to a vacuum box in my drive way to get a new hair color. 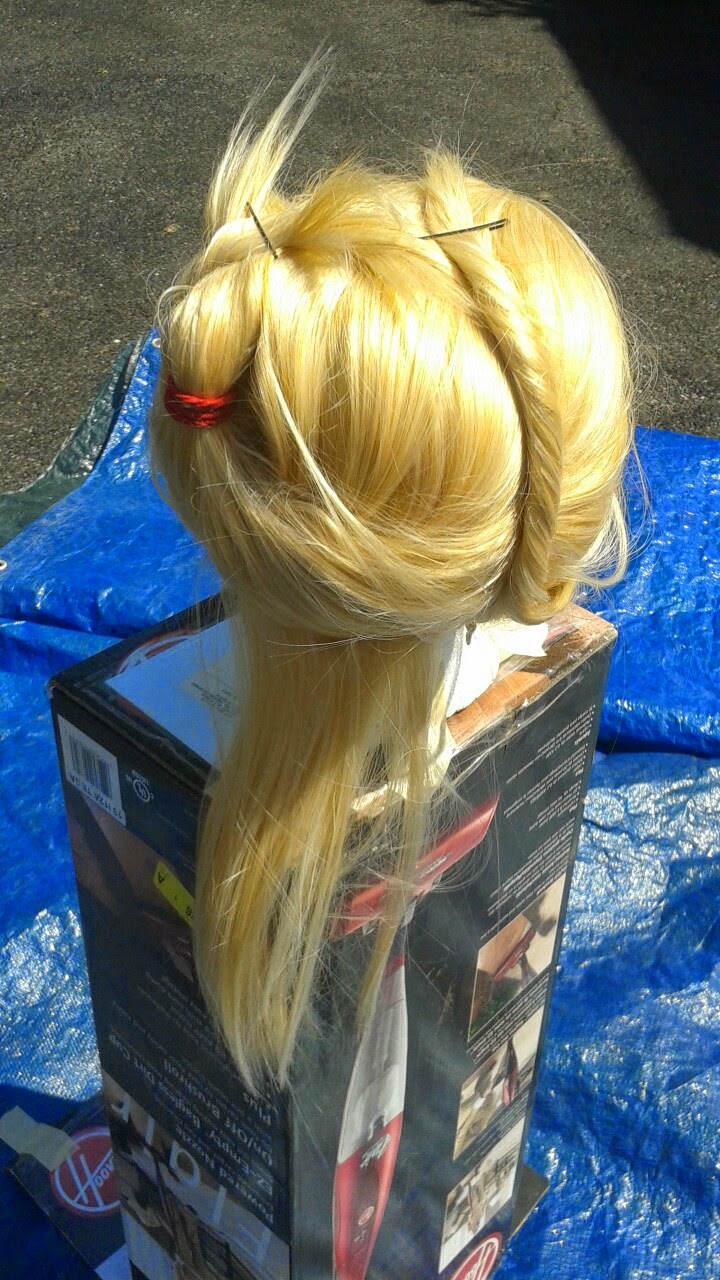 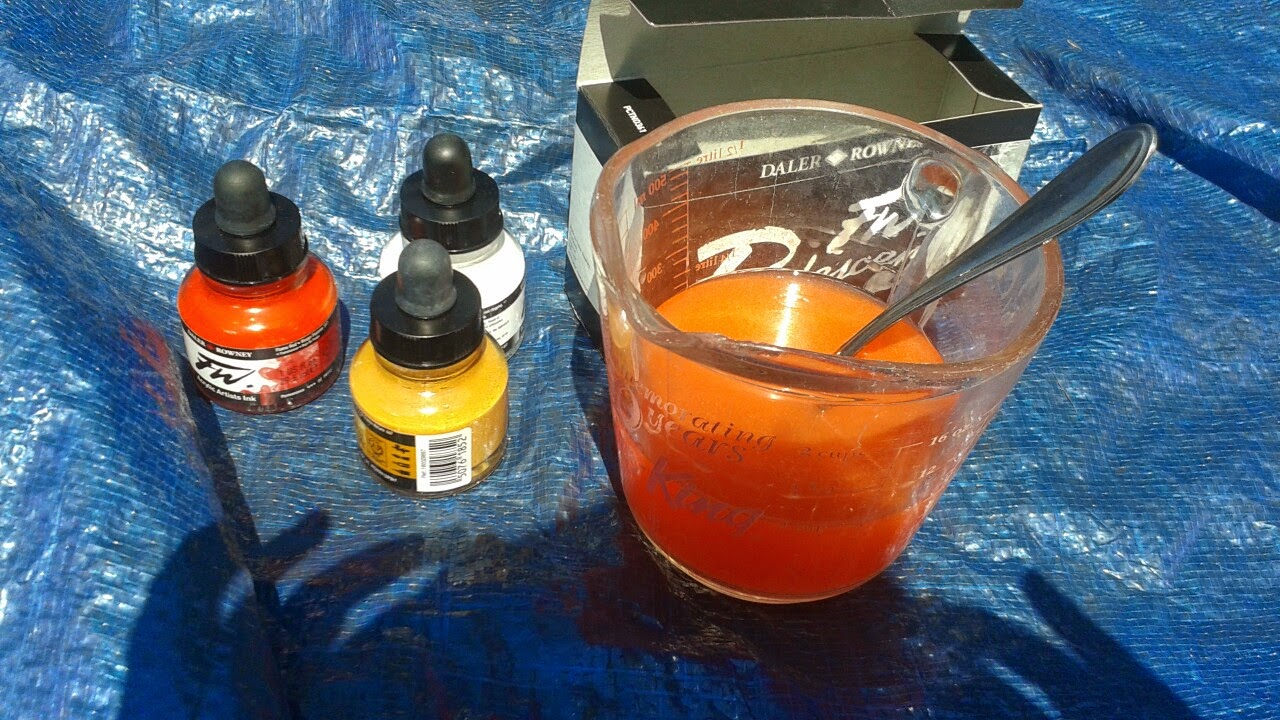 Materials:
.red and yellow FW ink
.rubbing alocohol (the tutorial I followed used two cups. I ended up using 4 quarts)
.a spray bottle
.a measuring cup
.a hairdryer
Here she is with her hair pinned up so I can dye the under layers first. Full disclosure: I may have screwed up. The tutorial I followed said 2 cups of alcohol and 10 drops of ink. I used 4 quarts total for the entire wig Roughly 20 drops of ink for each batch I mixed. That's because I didn't have a hairdryer, so the dye kept dripping out of the wig fibers before it could stick. If you use the hairdryer, you will save yourself a lot of alcohol (and burning fingers as it drips into your cuts).

Just mix the alcohol and ink to get the color you want, put it in a spray bottle, and SOAK the wig fibers, starting with the undermost layers and slowly working towards the outermost layers. I love this method, despite learning issues I had with it. It's much faster than the sharpie method, and it gives the wig a much more natural dispertion of color: some of my strands came out more blonde, others orange, creating more natural highlights.

Note: I found that the dye had the hardest time sticking at the roots where the wefts are sewn into the cap. It ended up being fine for my purposes, but if yours are visible, you can use a sharpie to color them.

When you're done dying, let it dry completely. Then wash the wig under cold water. Some of the color may run out. If the color isn't what you want it to be after washing, dye again.

So here's my wig dyed: 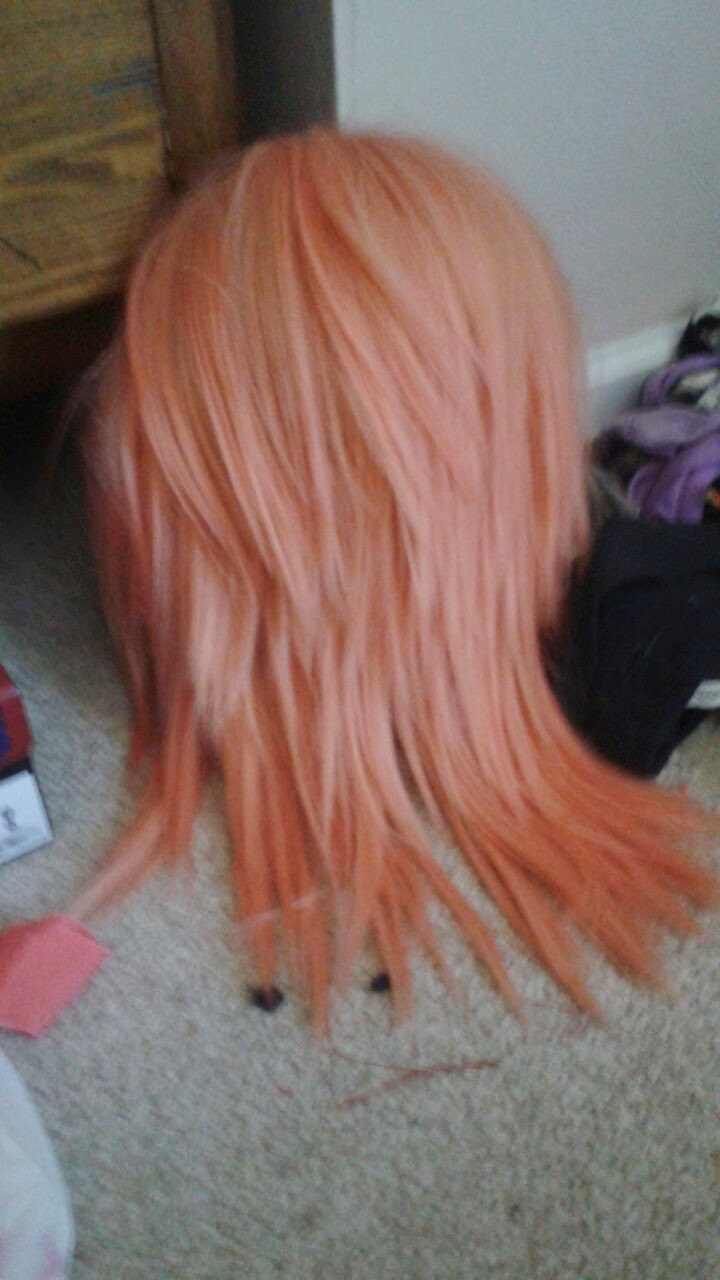 And here she is curled: 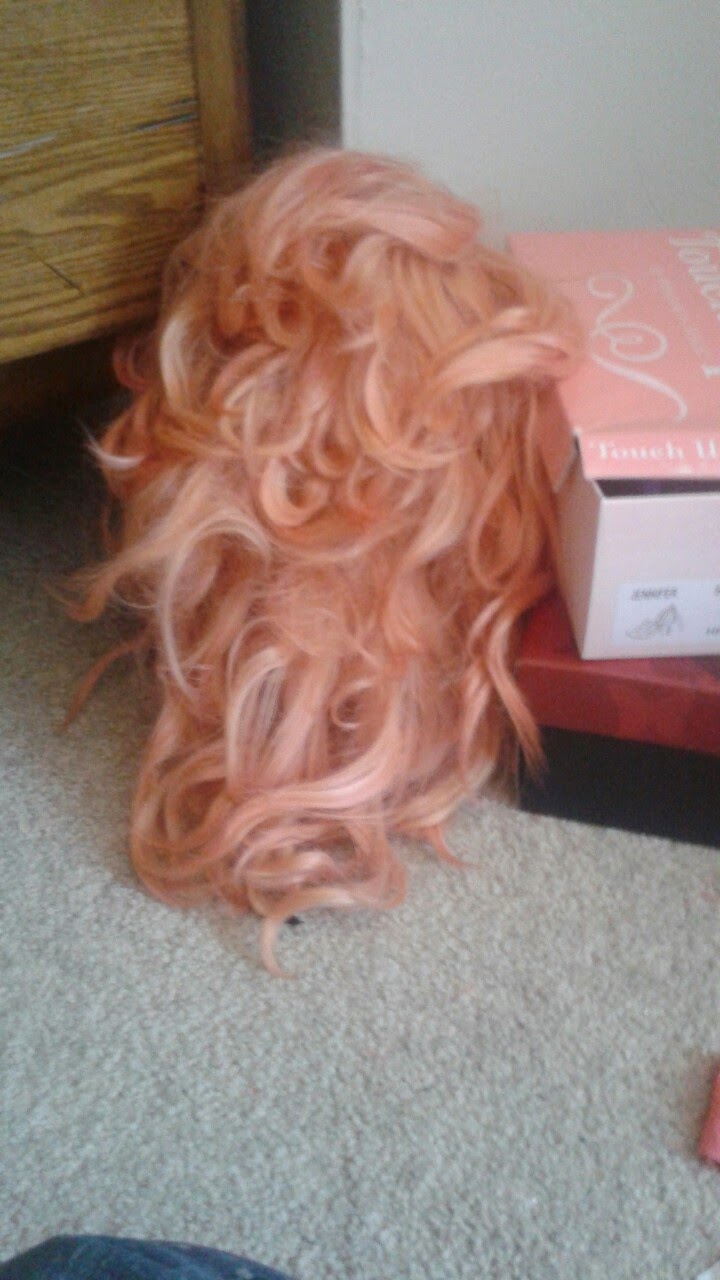 I curled the wig so I could get little cosmic curls as I styled the hair back. It isn't shown in Pearl's official artwork, but i liked the feminine effect it has. I just used a curling iron for this. People say to be careful about your iron benig on too hot to avoid melting the wig. I've never had this problem. I mostly just can't get it to curl well because wigs won't hold curls until they cool.Next I started teasing the wefts at the center of the wig to create a base to hold up the hairdo: 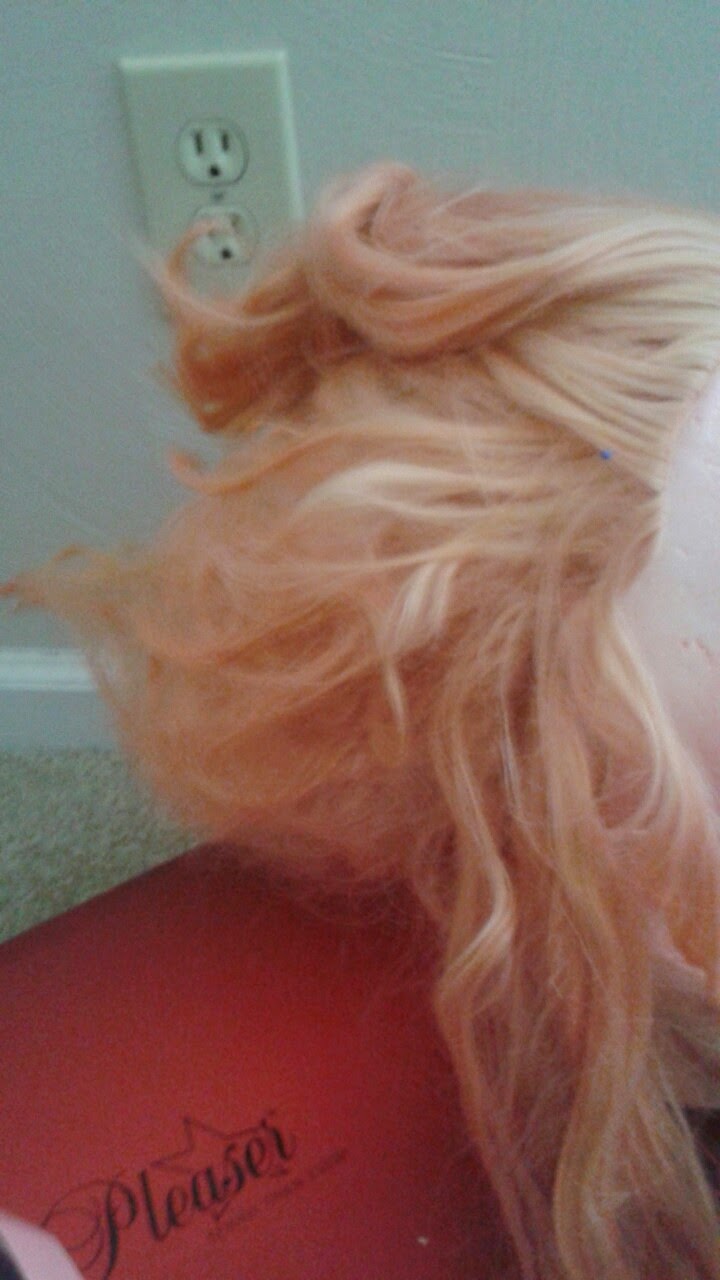 Fair warnnig, your wig will NOT recover from this. This is a permanent style choice. Your hair may come back from being back combed, but wigs are more finicky. Once I had a base, I started combing hair over it and spraying it in place with Got 2 B Glued Spray. I also trimmed as I went when it looked like the hairdo was going to be too long. 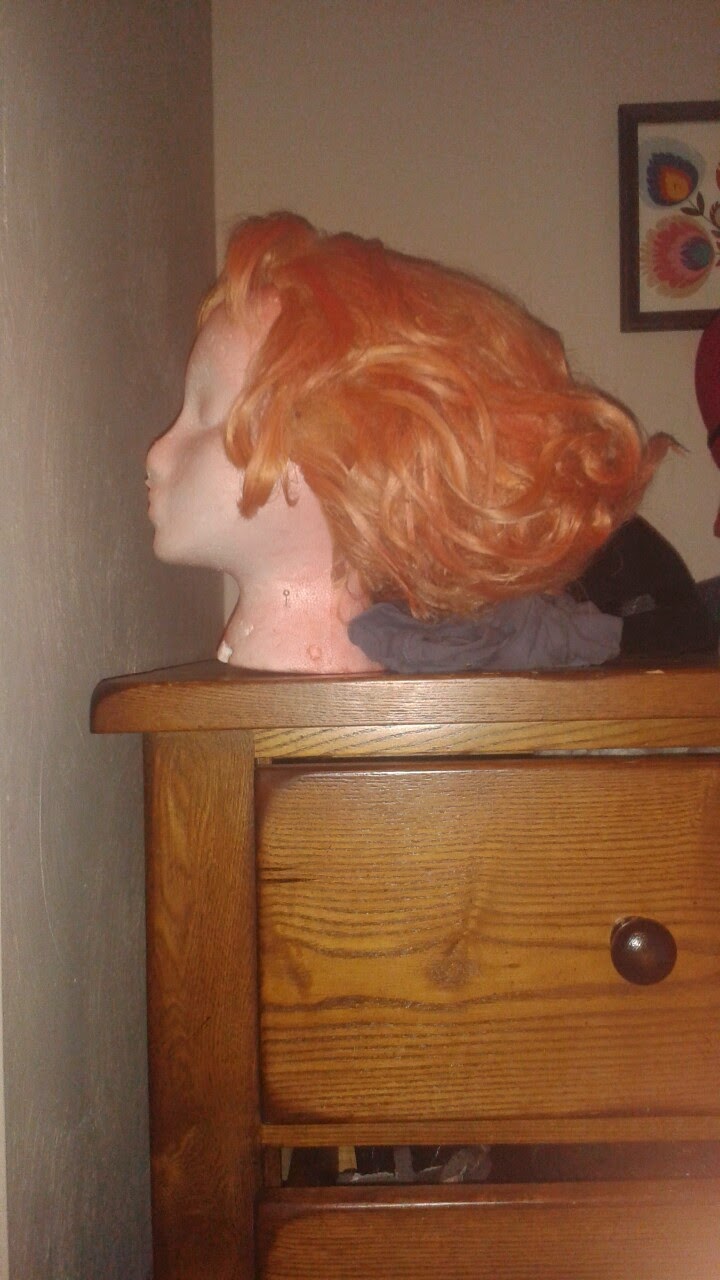 And that's it on the stand. 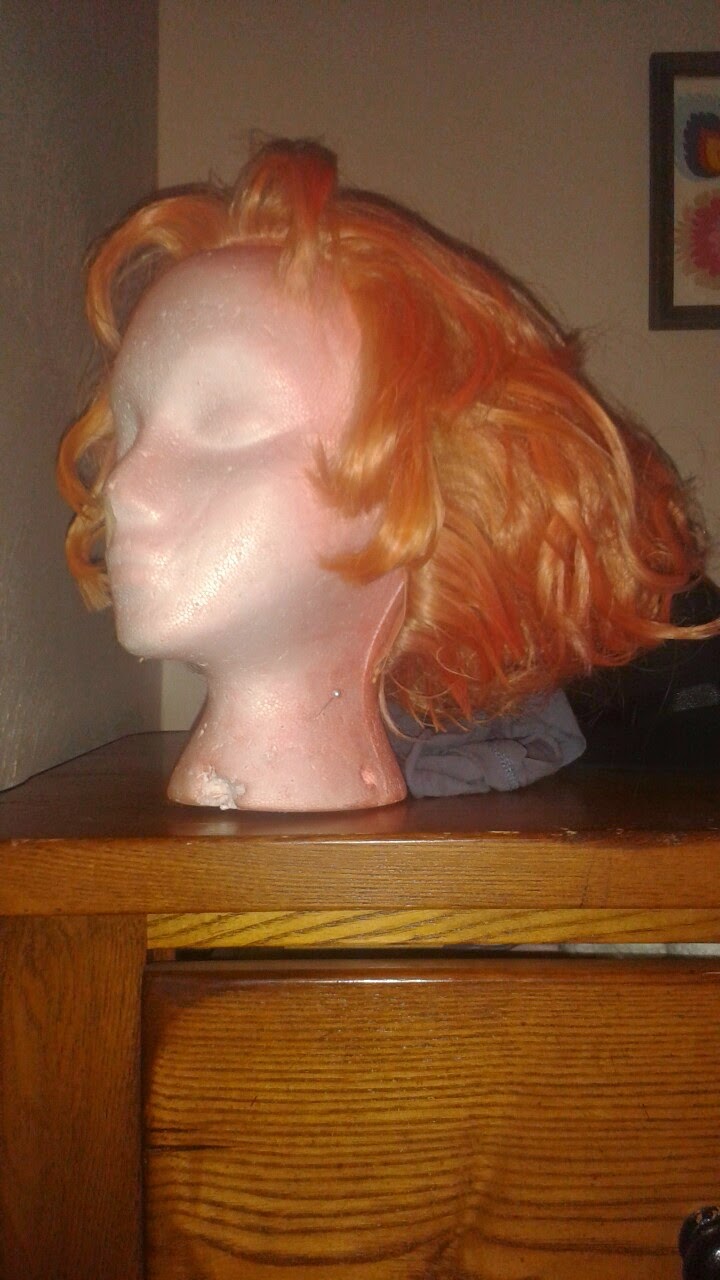 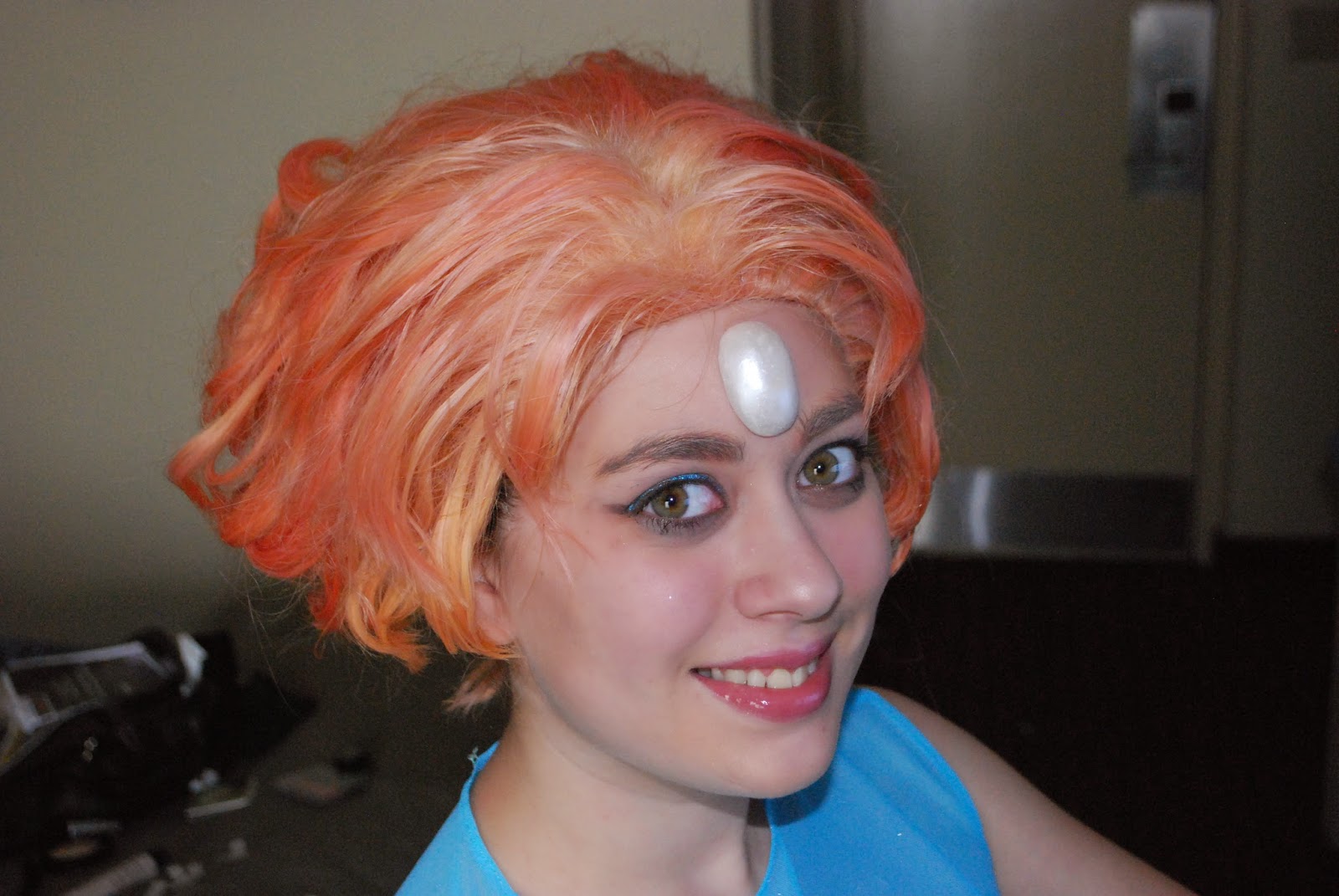 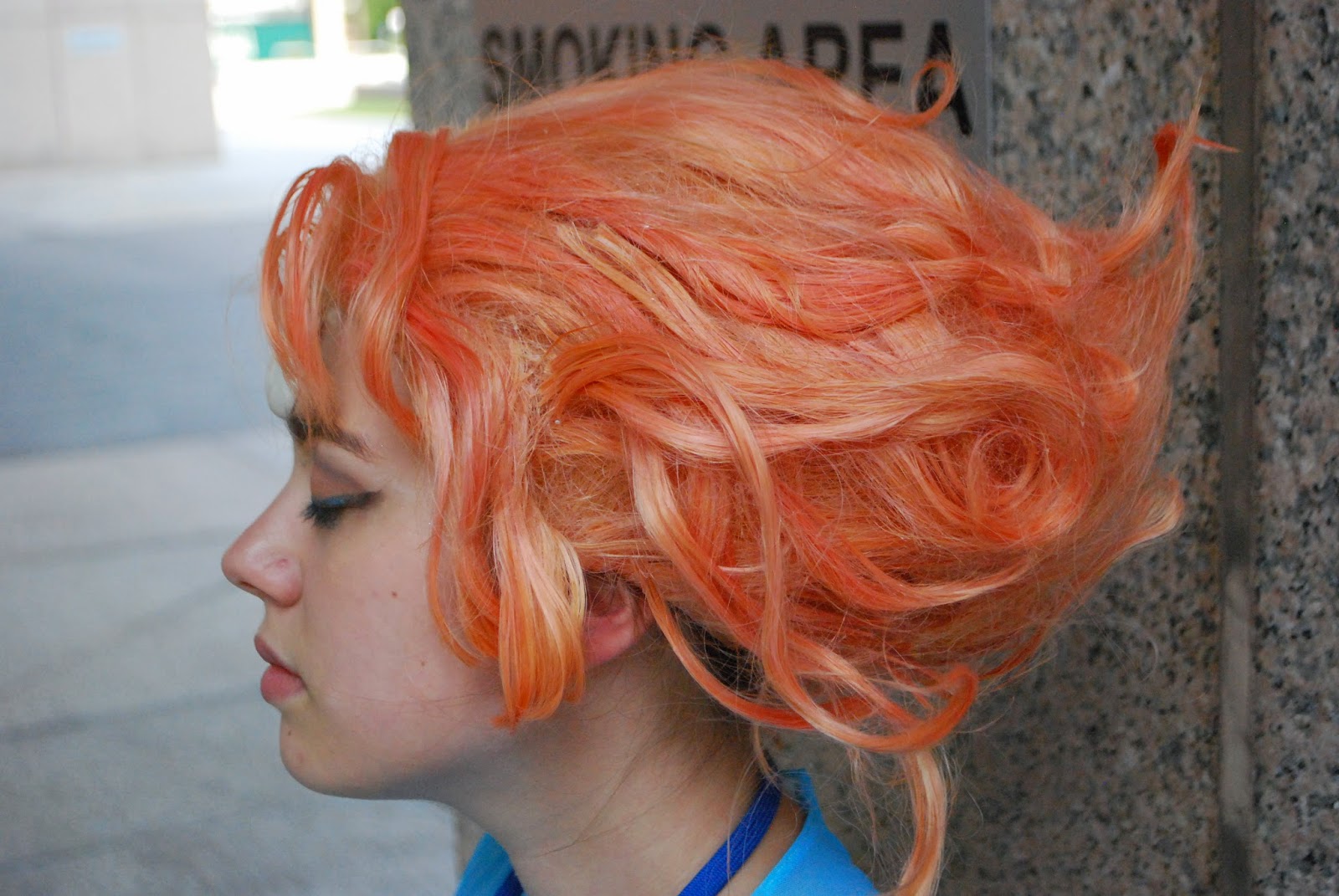